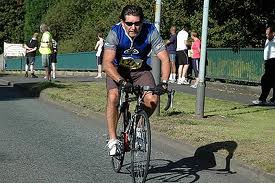 To prove he is still reasonably fit , Gary said he could cycle faster than most and could finish in the top 50 of the cycle marathon. Others laughed and so to prove a point he entered the cycle race at the  city marathon on sept 2nd.

486 lined up and guess what he came in 32nd after 2 weeks training to shut some people up and raised a little for charity.

Now he is entering the 30 mile cycle event around Manhattan in New York at the HHGFAA conference in October only this time he is dragging Chris Burke and Chris Starkey around with him.