One of the UK’s leading overseas moving firms, Burke Bros Moving Group burkebros.co.uk, based in the West Midlands, put on a very impressive display for the recent visitors to London’s ‘The France Show 2010′.

For the 2010 exhibition, Burke Bros decided to make a feature of their exhibition stand by driving a real live 18 ton truck on to their display, to give the 14,000 plus visitors a fascinating insight in to the myriad of personal possessions you can pack in to the back of a truck of that size, including motorcycles that are fixed within their very own tailor-made secure crates. 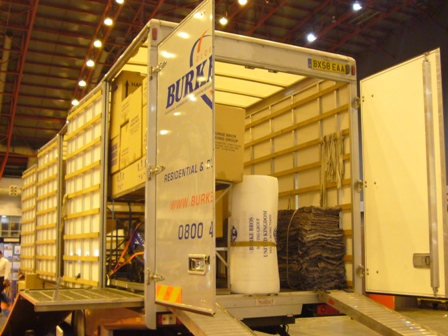 The Exhibition, which took place at London’s Earls Court, www.eco.co.uk, on Friday 8th to Sunday 10th January 2010 was organised by the leading publication, French Property News, widely recognised as the best and longest-running French Property Exhibition in Britain, now in its 20th year. Members of the public got free admission along with the chance to attend a whole host of useful seminar events that took place during the show. You can read more details about The France Show on the official website www.thefranceshow.com

Burke Bros’ Managing Director, Gary Burke, said “In spite of the sub-zero temperatures and very icy travelling conditions, we were extremely pleased to see, and talk to, the thousands of committed Francophiles who braved the weather to attend this year’s exhibition and who showed such enthusiasm for the show.”

“We took the decision to put one of our trucks on our stand, because we felt it would give the visitors a keener insight in to how their personal possessions would be carefully packed for their journey to France. It went down a storm. People flocked to climb up the ramps to see inside, with some saying it gave them a real insight into how their belonging would travel to France. We wanted to show people how the split level packing works, regards box stacking, plus how the side panels can be opened to gain greater access. Many people coming on to our stand said they really enjoyed the rare glimpse of seeing what’s actually involved in efficiently and effectively loading a truck, full to brimming.”

Between Jean Christophe Novelli, wine producers, tourist boards, estate agents and ferry operators, visitors from all over the UK were able to enjoy a taste of France without even crossing the Channel. The property section, where Burke Bros were exhibiting, was a hive of activity attracting many interested buyers and investors, with many visitors now one step closer to owning their own property in France.

Chris Starkey, Head of the Burke Bros International Department, said “We’ve been exhibiting at The France Show now for many years and can highly recommend it. We’ve always found it to be an excellent place to find out all you need to know about moving to France.”

Chris Burke, Co-Director of Burke Bros, said “Exhibiting at The France Show gives us chance to speak to potential new customers and listen to their story about why they’ve chosen France to start their new life overseas. We also like to show potential customers all the benefits of using our removals to France services, where we make it a smooth and enjoyable moving experience, plus tell them stories about how we helped other customers with their move to France too.” 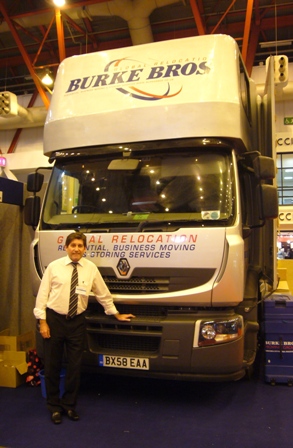 Miller Hogg, Archant Life France Regional Managing Director, said: “We’d like to thank Burke Bros for their continued support, as the predominant feedback we received from Property and Lifestyle exhibitors was that they had a great show, as those visitors who braved the weather were obviously serious and committed customers. Next year we plan to enhance the benefits of the exhibition and change the audience experience. We will ensure that The France Show 2011 captures the imagination of the UK public, keeps France on the map, and maintains its place in the UK public’s heart.” www.thefranceshow.com

Dick Schrader, who was the original founder of the French Property News Magazine and related Exhibitions, and who personally used the services of Burke Bros Moving Group many times, over the last 20 years, invited Gary Burke and his team, along with other exhibitors, to join him in a celebratory drink, as Dick is formally retiring from the France Show, having more recently worked in the capacity of specialist consultant to the show. Gary Burke wished Dick all the best and, reminiscing on the past, thanked him for his huge contribution to the overall success of The France Show.