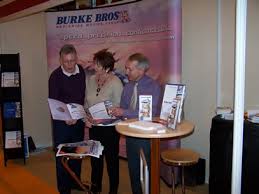 A Place in the Sun Live, the award-winning Channel 4 overseas property exhibition, brought a ray of  sunshine to the north-west (29th February-2nd March) when it debuted at Manchester Central (GMEX). 8029 visitors from right across the region flocked to the event in search of a property abroad and, with an average of £147,000 to spend, it appears their desire for a place overseas remains strong in the face of any credit crunch.

Gary Burke, MD of Burke Bros Moving Group, said, “It was a very well organised show with friendly staff and plenty of exhibitors and visitors, There was lots of choice for anyone intending to invest in an overseas property.”

For organisers Brooklands Exhibitions, part of the Brooklands Group that also publishes the official magazine of the A Place in the Sun TV programme, the Manchester show proved a major success ahead of three further UK events to be held this year, and comes despite a conservative property and financial climate.

Darren Styles, Chief Executive of Brooklands Group, said, “Some industry commentators would have it that an overseas property show in Manchester doesn’t work; others will tell you the credit crunch and a fear of recession have chilled the market to a standstill. Not so. With more than 8,000 visitors to a show of about half the size of our events at ExCeL and NEC means a great weekend for show goers and the 170 exhibitors alike. It’s a fantastic start to the 2008 UK show calendar and augurs well for our return to London at the end of April.”

“We are absolutely delighted with the success of our brand-new Manchester event. The venue and the city offered us incredible support and the venue had a great vibe all weekend. Our 2009 date is already set!”

Two seminar theatres, meanwhile, offered independent advice from expert speakers on subjects ranging from investment property portfolios and finding a reputable agent or developer to emigration: it was standing-room only at each of the twelve sessions daily.

Katie Williams, Monarch Airlines, commented, “The organisation of the exhibition was fantastic and overall it was a big success for us. We received very positive feedback from the visitors to the exhibition about Monarch, and had over 600 people enter our competition to win free flights.”

David Ames, Harlequin Property, said, “The show was a huge success, in many ways our best and most successful A Place in the Sun Live yet, and we have done some great business and opened many new doors. We will return with a larger stand (or even two) next year.”

(co-located with the London Golf Show)

If you would like to speak to Burke Bros Moving Group and find out more about their comprehensive range of removal services please visit the Burke Bros website at www.burkebros.co.uk or if you have any immediate questions or requirements, please contact Chris Starkey on +44 (0)1902 714555