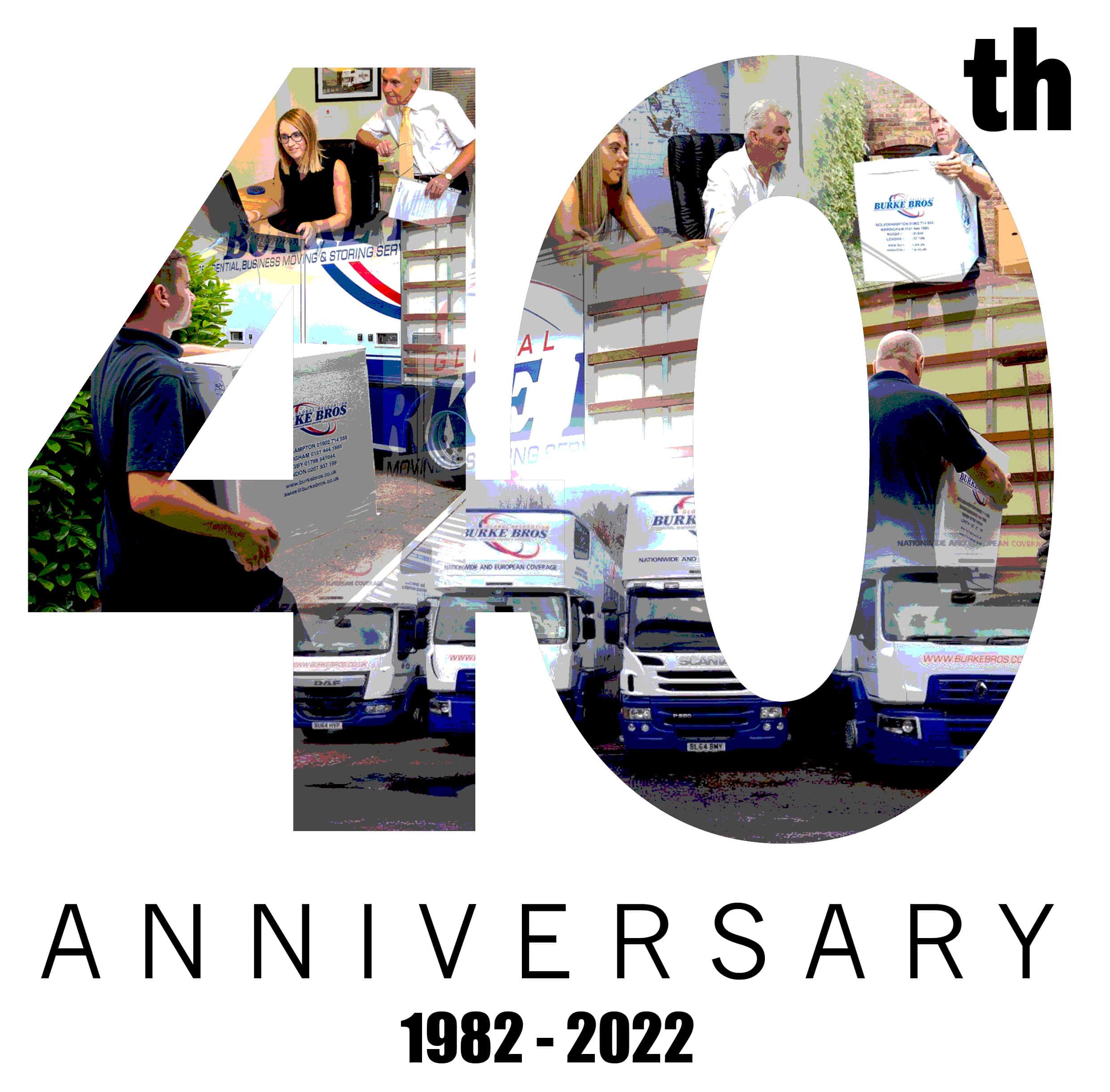 “When the average UK house price was £21,811, a loaf of bread cost 37p and the Kevin Kegan perm was in fashion, Brothers Chris and Gary Burke started Burke Bros Moving Group with less than £1,000. The year was 1982.

Forty years on the company is reflecting on some of its key events and how their 40th year is taking a philanthropic turn.

First Moves
“If you want to start a business, removals, funeral undertakers or skip hire are all industries that have a lot of work and need competition.” This sage advice was dispensed by Chris and Gary’s Father and it would go on to inspire life-long careers in the removals industry.

They started out as a domestic mover with a Luton van and within three years they had built the business up to a fleet of five vans and moved into small offices and warehousing. This was shortly followed by the Burke Bros vans travelling to Europe for their very first moves to Germany and to France. The company also joined the BAR in 1985 with Gary attending the study tour to Australia in 1988 organised by the BAR (IFWRI) in the bicentennial year and three years later Chris was part of the study tour of South Africa. Gary became Chairman of the BAR West Midlands in 1989 and today Chris is treasurer. The company turned its sights on international moving and remembers their first consignment was to Hong Kong in 1987. Membership to FIDI followed in the 1990s and membership to HHGFAA (now IAM) by the late 1990S.

The brothers went onto purchase three leading removal companies: Hudson & Rudge Removals Birmingham Ltd, George Clark Removals Ltd (Wolverhampton) and Goddards Removals Rugby Ltd, who were members of BAR and had all been long established names in 1844, 1898 and 1926 respectively, in a two-year period between 1989 and 1991. After several years they incorporated the companies into the formation of the Group.

The following year they purchased a fourth company, which caused resentment in the BAR West Midlands area. They realised they didn’t need to keep buying other companies and have a branch in every city as Gary remembers: “While other companies were discovering the fax machine, we were one of the first removal companies to have a website in 1996. Some will remember dialling in through Pipex. We could see that electronic mail and the internet would allow us to open up to the world from Wolverhampton. We didn’t need a branch in every city to garner enquiries, we were ready to be part of the digital revolution.”

In 1995 they purchased a three acre industrial estate on Fox’s Lane, Wolverhampton to accommodate their growing business. This remains their present head office and in later years the brothers opened a self-storage facility on the site to complement their services.

Burke Bros also set up an animation company and had an animated cartoon featuring ‘Burkey Bear’ and his pals, involved in a range of moving day escapades. They had an e-commerce website selling associated merchandise by 2000. The project had the backing of venture capitalists and investors and was eventually amalgamated with BBC Pebble Mill but unfortunately despite approaching Nickelodeon, Disney etc, none of the channels would fund 16 episodes and a full feature film. After two long years of perseverance the project was brought to a halt, but Burkey Bear continued to be the company mascot.

PAIMA
The company joined PAIMA in 2001, and this year reach their 20th anniversary with the organisation. Burke Bros soon became advocates of PAIMA, building both business relationships and life-long friendships along the way. It was particularly the environmental good practice that PAIMA promotes, that the company have supported and in 2006 Burke Bros were proud recipients of the Juan Peralta Ecology Award in San Francisco for the best contribution from a moving company on global environmental issues. Chris Burke presented to the assembly on the company’s environmental project. Ten years later, they won the award for a second time in New Orleans for sending 0% of the waste they handle to landfill. Gary also became involved with the PAIMA board, becoming Vice President of PAIMA in 2010 and was involved in the decision making process to transfer PAIMA Head Quarters from Panama to Florida.

All in it Together
When the financial crash hit in 2008, the company remained steadfast in looking after their staff, suppliers and customers. Like many companies they had to cut costs, but they remained loyal with existing suppliers, working with them to share the financial burden and recognising that they are part of a community. Four of their local competitors went out of business within two years. Why had Burke Bros survived? The directors put it down to prudently investing in staff and equipment at a time when their competitors hadn’t. When the economy started to pick up, they were ready to go.

The Pandemic
Whilst 2020 made for an unexpected year across the industry, once the housing market opened up, and house moves were allowed to take place, the company found that enquiries for private moves soon picked up. In the first five days of opening up, they booked 21 consignments to France. In no time at all the workforce were back and the company have been trying to recruit ever since.

People Power
The company has benefitted from a lot of long serving members of staff. In particular, Dave Colley, Operations Controller first arrived at the company looking to do work experience, whilst at school and then started working for the company at 16. Working his way up to management level, 32 years on Dave remains a real lynchpin at the company. Sales Manager, Ben Hingley joined the organisation 29 years ago, bringing with him an absolute wealth of experience and knowledge. He has become a real mainstay at many of the exhibitions and is a well-known name for moving to France. Foreman, Darren Hayward started out with the company as a porter at 19 years of age. His reliability and good humour have stood him in good stead, having now clocked up 36 years with the company. Gary added; “We have many other loyal members of staff following through. We aren’t complacent though; we continue investing in the best young, up and coming talent to ensure we continue finding loyal and committed people.”

Charitable Ties
The company have always valued giving back to the local area and supporting local charitable causes. Over a number of years Burke Bros have supported Compton Care; a hospice supporting patients facing life-limiting illnesses and their families, to make a difference to people’s lives when their illness is no longer curable, through donations of furniture and books collected from house clearances, to their network of charity shops to help raise funds for the organisation. Gary became Trustee and Non-Executive Director at the hospice.

They also support ‘The Good Shepherd Ministry,’ an organisation helping to meet the basic needs of some of the most vulnerable people in Wolverhampton through the collection of non-perishable foods to be distributed to the homeless through their food bank and soup kitchen services.

How will they be marking the company’s 40th year? The milestone will be celebrated by a number of activities and events. In particular the year will take a philanthropic approach. As Compton Care are also celebrating their 40th year in 2022 to commemorate this occasion they are coming together with an exciting new fundraising campaign, “Project Home Move”. Throughout 2022 Burke Bros have committed to match every £5 donated by their customers to Compton Care. The funds raised will help the charity to continue to provide care and support to adults living with incurable condition and their families.

James Elliott, Director of Income Generation, Marketing and Partnerships/Deputy CEO, said “We are absolutely delighted to be partnering with Burke Bros on this new initiative and we are so grateful to Gary and the team for choosing to support us. For the past 40 years we have supported thousands of people in Wolverhampton and surrounding areas, providing practical, physical and emotional support. The past two years have been extremely challenging for the charity so now more than ever we are so thankful for Burke Bros support.”

Whilst the fundamentals of house moving have remained timeless, the industry is of course not operating in a vacuum, as Chris explains: “The biggest change I have noticed in 40 years is compliance and too much emphasis on box ticking. The actual removal process has not altered one iota since Gary and I started on the vans back in 1982 and even before our time to the days of horse drawn carriages. You load a customer’s furniture and effects, provide protection, transport it and unload into their new home.” On a macro-level the ever-changing digital landscape is also shaping the industry, as do shifts in customer behaviour. Will consumerism and the rise of a disposable society continue to inform the trend of purchasing disposable, lower value furniture and transient personal effects? Or will the urgent focus on sustainability serve to return us to opting for investments in longer lasting products to furnish our homes with and how will this affect a consumers’ decision making process when it comes to removals?

What we do know is that when it comes to moving and negotiating the dynamics of the future; Burke Bros are poised and ready. In the words of Chris Burke: “You are only as good as your last move,” and they have no intention of resting on their laurels.

(Article printed in the Removals and Storage Magazine, February edition.)