Edinburgh at the recent British Association of Removers (BAR) Conference. 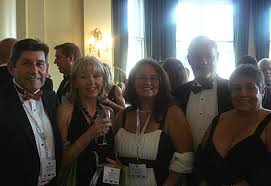 The setting was @ The Balmoral hotel to host the recent British Association of Removers (BAR) International Conference, which attracted 350 people from companies from the UK and overseas.

The photo shows them attending the reception, prior to the formal dinner.

Left to right, Gary and Melanie Burke, Macarena Scalia, Joe and Monica Pauley, from COCO’s International Movers, who are Burke Bros’s agent in Miami, who flew in specially for the BAR conference.

After the conference, Joe and Monica Pauley came down to Wolverhampton to spend some time at Burke Bros HQ, meeting the team and holding discussions with Burke Bros.

Also joining the delegates at the conference was an old friend Arvhind Joshi from  India, who can be seen walking off the Royal Yacht Britannia with Melanie Burke , after attending a cocktail reception on board. See more about the Royal Yacht at www.royalyachtbritannia.co.uk