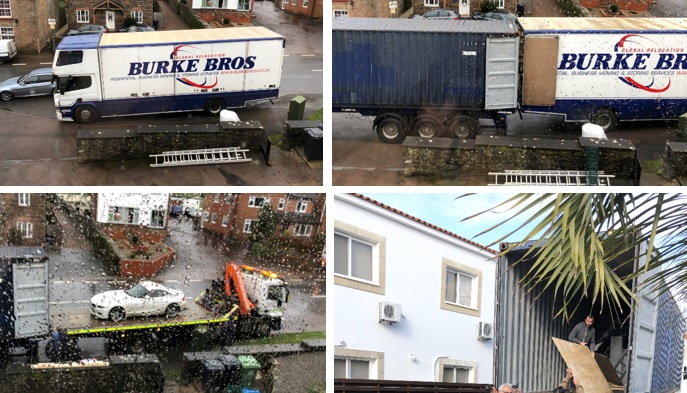 Customers Mr and Mrs Kittner visited Cyprus during 2018 and 2019 before making the decision to re-locate there from their UK home in Mitcheldean, a small town in the east of the Forest of Dean, Gloucestershire. After visiting the island, they decided Vrysoulles, Famagusta in Cyprus would be their new home.

To ensure that the move to Cyprus was conducted as professionally as possible, they decided to opt for a professional removal service. Mrs Kittner explained that, after researching moving services online: “We chose Burke Bros because they were informative and helpful and I had liaised with Jackie when making my initial query.”

Burke Bros international department arranged for an experienced estimator, Paul Lucas, to visit the Kittner’s UK home at the end of last year. Paul accurately calculated the volume of the household contents to be moved, discussed the export packing requirements and the logistics of the move.

On a particularly rainy day in Gloucestershire, Burke Bros trained crews export packed and wrapped the furniture. The customers’ household effects were loaded into the container at residence the following day, Mrs Kittner added: “Thank you to all of your team, your guys were brilliant.”

Burke Bros arranged for a customised pick up of their vehicle on a Burke Bros recovery truck, to enable their car to also be loaded safely into the 40ft container at the residence. Commenting on the process Mrs Kittner added: “In particular Jackie has been very helpful with my vehicle queries.”

With their possessions appropriately packed, the vehicle securely loaded to protect itself and the other items in the container, the inventory checked, the container was locked, sealed and taken to the port of Felixstowe to be safely on its way to Vrysoulles, Famagusta via Limassol port.

Upon arrival in Cyprus, the effects were customs cleared and Burke Bros Moving Group’s Cyprus agents delivered all household effects and the vehicle to the property in Vrysoulles.

Mr and Mrs Kittner concluded: “Our experience has been outstanding and we would definitely recommend Burke bros to anyone we talk to.”