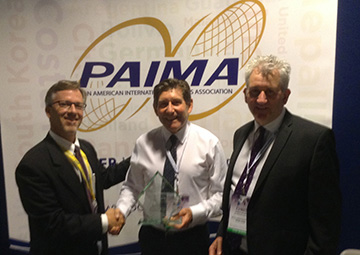 A Wolverhampton based removals company have fought off competition from around the world to achieve a global award for a sustained commitment to environmental responsibility and ecological awareness.

Burke Bros Moving Group has been awarded the Juan Peralta Ecology Award by the Pan American International Awards Association (PAIMA). After competing with entrants from around the world, Burke Bros Moving Group represented the European nomination at a conference with delegates from more than 40 countries from all five continents. They were then presented with the overall award for the most outstanding environmental performance within the moving industry.

Burke Bros Moving Group have maintained a record of recycling 100% of reusable materials without any waste going to landfill. The moving company have implemented a waste management system, working in collaboration with ACM Environmental PLC to ensure the procedure is environmentally and legally compliant.

Upon receiving the award, Gary Burke, Managing Director of Burke Bros Moving Group commented: “We’re incredibly pleased that our work has been recognised through this award. It was a real pleasure to receive congratulations from all corners of the world at the PAIMA conference. We take our commitment to environmental issues seriously and work to set the benchmark for competitors in the sector. Importantly, the waste management processes we have implemented are sustainable for the future.”

Burke Bros Moving Group are no strangers to winning awards, having also been the overall winner of the Juan Peralta Ecological Award in San Francisco in 2006, for the best contribution from a moving company on global environmental issues and recipient of the “Service Provider of the Year” award for 2013-2014, from the Black Country Chamber of Commerce.