How 46 Wheelie Bins Helped a Family Move to France 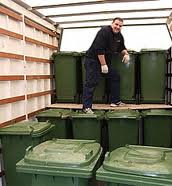 One of Britain’s foremost overseas removals companies, Burke Bros Moving Group, based in Wolverhampton UK, www.burkebros.co.uk regularly help people move from the UK to France, but on this occasion they received a very unusual request from Steve Hill, and his family, who were planning

their move from High Wycombe in Buckinghamshire UK to their wonderful new home in Touffailles, Tarn De Garone, near Toulouse in South West France.
Steve contacted Burke Bros to see if they would be willing to move all of his personal possessions and workshop tools, not in the regular removal boxes and removal cartons, but in 46 green wheelie bins.
Steve figured his idea would allow him to save a great deal of time when it came to loading up the removals truck on moving day. He said: “Wheelie bins are the perfect way to store and move things. They’re the ultimate storage device. They’re strong, tough, and sturdy, they’re water-proof, dust-proof, frost-proof, vermin-proof, heat and chemical resistant, highly manoeuvrable, and can be stored outside. They’re relatively cheap to buy too, at around £20 each”.
Steve, who in February 1981 started his own UK based business www.stevehill.co.uk, decided to
specialise in the repair and restoration of Citroen 2CV’s, after leaving NatWest Bank in the City of London. He found his passion for the French based vehicle was to lead him to actually move to France.
In 1977 he co-founded the 2CVGB Club, which is now a highly regarded flourishing International 2CV Club. Steve said: “I’ve had an A Series Citroen all my driving life and in 1973 I took my driving test in a 1971 Dyane 6. So I guess the move to France was always inevitable.”
Dave Colley, Head of Burke Bros Operations said: “Along with the furniture, the crew found it really easy to load up our removals van, which we did in about two hours, so Steve’s off-the-wall idea certainly worked!” Dave added: “Although it was a novel way to pack personal possessions, they’re not the kind of packing material we foresee becoming a more regular method for the typical family moving abroad.”
Steve said: “My initial plan was to sell the wheelie bins locally in France, once I’d removed the contents, but I’ve now found they’re making ideal water butts in the acre or so of land I have that surrounds my new French home and workshop.”
As the trend for Brits moving to France continues to grow, Burke Bros are committed to offering continued support with their comprehensive range of removals and packing services. If you are considering starting a new life aboard and would like to find out more about moving household possessions overseas, please visit the Burke Bros website atwww.burkebros.co.uk or if you have any immediate questions or requirements, please contact Chris Starkey on +44 (0)1902 714555
End of Press Release
Contact details
Chris Starkey – Head of International Moving
Burke Bros Moving Group Ltd
Burke Bros Trading Estate
Foxs Lane
Wolverhampton
West Midlands
WV1 1PA
UK
Tel: +44 (0)1902 714555
Email: international@burkebros.co.uk
Website: www.burkebros.co.uk