Office moves and relocation of Laboratories for Eurofin. 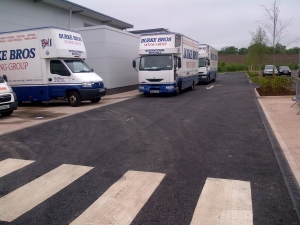 Burke Bros were awarded the office relocation of Eurofin. The move included offices, laboratories, machinery and our packing teams had to pack thousands of pieces of glass equipment prior to the moves. The moves were carried out over seven weeks with the final move to be completed at the start of July. 36 Laboroatories have been transferred with heavy lifting equipment having to be used to move large heavy items from upstairs and out through windows due to the size and weight. Most staff are now in place at the new i54 headquarters in Wolverhampton. The moves were completed on time with little downtime for Eurofin. The company has also helped Moog Aerospace with long term storage who have also moved onto the i54. These are the first two organisations to relocate to the new site which has also attracted Jaguar landrover.