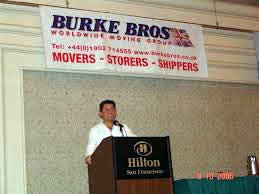 (Picture to the left; Gary Burke at the conference)

The movers, storers and shippers, Burke Bros Moving Group Ltd, recently returned from San Francisco with a prestigious award from the Pan American International Movers Association (PAIMA) for the best contribution on global environmental issues. The Company, founded in 1982 and with its headquarters in Wolverhampton England, is the first UK moving company ever to win this prestigious award.

Applications for the Juan Peralta Ecological Award spanned many moving companies from around the world. PAIMA, based in Panama, has representation from every North and Latin American country as well as other countries from around the globe.

The panel of judges were from 5 different countries and judged Burke Bros to have contributed the most by actively working to save the ozone layer, with a project that involved the collection, transport and disposal of refrigerated units, working closely with organisations that were stock piling units, along with the appropriate recycling plants.

Gary & Chris Burke travelled all the way to San Francisco to attend the award ceremony and collect their award. Burke Bros MD – Gary Burke, commented saying “This award has giving Burke Bros Moving Group and Wolverhampton a high global profile within the household moving industry and we couldn’t be more delighted to have received such highly esteemed recognition. The presentation and photo calls were the nearest we’ve been to a Bafta award!”

Burke Bros, at www.burkebros.co.uk, have been members of the Latin American Movers Association for several years now, and as well as being the UK’s highest tonnage moving company between UK and Latin America, Gary Burke is also the European Regional Director representing the European Movers interests within the Association.

Burke Bros, who have connections all over the world as well as many business interests in Latin America, were congratulated on their award success by industry colleagues from across the international removals community.

If you would like to find out more about Burke Bros Moving Group and their range of eco-friendly and international removal services please visit the Burke Bros website atwww.burkebros.co.uk or if you have any immediate questions or requirements, please contact Chris Starkey or Mandy Dawson on +44