Is this the Midlands longest serving removals man? 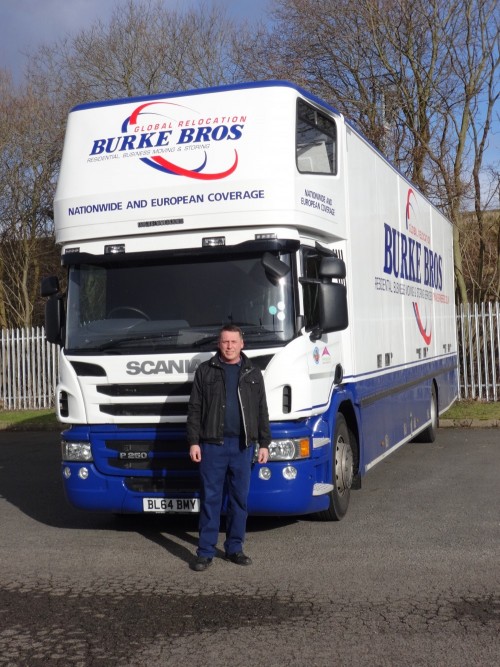 We have recently had an article published in The Mover Magazine about one of our senior removals men Darren Hayward, who has now worked in the removals industry for over 30 years.

Read the full article and what Darren had  here:

Burke Bros Moving Group, based in Wolverhampton, have seen some big changes over the past 33 years, but no one more so than Darren Hayward, one of their longest serving removals men, who’s now worked in the removals industry for over 30 years.

Starting when he was just 19 years old, Darren first came to the company back in 1985, when Burke Bros was working from a single unit on the small Fallings Park Industrial Estate in Wolverhampton, with only 3 small vans.

Now he’s 49 and still loving the removals industry, but now he works for a Burke Bros that is one of the most reputable award winning International and UK domestic and corporate moving organisations in the UK, shipping 1,000s of families and businesses a year to all corners of the globe.

Darren said: “When I first left school I wasn’t sure what I wanted to be so I started off in a factory. I must admit I hated it!” Having recognised he wanted a more active job, and not one where he was just stuck in the same place, he joined Burke Bros as a Porter, working hands-on serving the customers, packing the customer’s belongings into boxes, moving furniture, loading the vans and then unloading it again at the other end.

Although, his first day wasn’t quite what he’d bargained for. It was hard physical labour. As Darren recalls: “To start with I hated the job as I didn’t realise how demanding it was going to be and I remember Gary Burke (Burke Bros’ Managing Director) wouldn’t even let me have a cigarette break.”

As Gary and the crew knew what Darren would be feeling the next day, when he didn’t appear for work, they drove the van round to his house, knocked on the door, got him out of bed and persuaded him to join them on the next job. He hasn’t looked back since.

Gary Burke said: “Due to how hard and demanding removals work is, we knew, from our own experience, that he’d be physically tired. You’ve just got to breakthrough that initial pain barrier and get on with it.” Darren was glad they did.

These days, as an experienced Foreman, Darren is responsible for coordinating the move on the day, dealing with the customers and giving them a plan for what’s happening regards their move. This involves complex logistics and leading the team to ensure the move is a smooth and well-coordinated success. He said: “I also enjoy making sure the newbies and younger removals guys are being well trained, particularly in their softer skills, like customer care, which is as important today as the actual packing and lifting.”

Having done removals work for over 7,000 work days, Darren’s moved 1,000s of people, including even famous celebrities. He said: “It’s been amazing the different types of people I’ve had the pleasure to move. I’ve moved International footballers such as Rio Ferdinand, Robbie Keane and Steve Bulls and football managers like Gordon Strachan, Dave Jones and Gareth Southgate, to name a few!” He’s even moved furniture and effects from Kensington Palace to France.

Amongst the most memorable items he’s moved was a collection of paintings, by a world famous painter, and he couldn’t believe it when he found out they were all valued at £20million, yet it would all fit into the back of a small van.
Gary commented saying: “Darren is one of the most reliable men you could ever wish for, even if it’s an early morning start, which is sometimes as early as 4 or 5am.” Darren said: “I’ve just gotten used to it over the years, but as you start early, then you get to finish early! We always unload a lot quicker than loading, so when you finish a job, in a faraway location, the rest of the night is yours!”

In fact, the travelling is Darren’s favourite part of the job. He said: “You can be in a different city every week, which means I get to see places that I wouldn’t otherwise see working in a factory.” Having travelled to countries all over Europe and he fondly remembers the fun he’s had in Alicante and Benidorm, Southern Spain, during his weekend rest periods.

He’s gained quite a reputation for being one of the comedians amongst the team. He said: “Being in this industry you have a lot of stories to talk about, and some things I couldn’t possibly reveal. But you have to have a laugh! I always have a smile on my face throughout the day and have some good times with the crews. It makes the work a lot easier.”

Darren’s keen to encourage other young people to work in the removals industry, as long as it suits them and they’re willing to work hard. Darren said: “I always feel a sense of satisfaction when youngsters learn over the years and develop into really good removal men.”

As Burke Bros do business and office moves he recalls, during the late 80’s, doing removals work every week for British Telecom and the Police Force. He said: “I’ve moved all sorts of offices including big banks and crown courts. The biggest office moves I have been involved in were moving the General Post Office to their new headquarters, which took six weeks. I’ve relocated Dunlop to their new Birmingham headquarters and Goodyear’s from Wolverhampton to Birmingham too. But the biggest move was an engineering firm which took us 56 truckloads from North Acton to Telford.”

When asked to sum up the industry in a sentence or two, Darren said: “It’s a strange industry. When you go from working on a job in Kensington Palace to the next job moving someone in a council house on benefits, for Dudley Council, you get to experience all walks of life.”