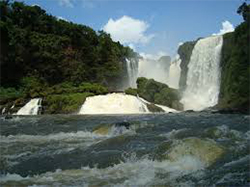 Do you need removals to Paraguay? Paraguay is a landlocked country in central South America, it is bordered by Argentina to the south, Bolivia to the northwest and Argentina to the south. Due to the country’s central location in South America, Paraguay is often referred to as the “Heart of South America”. Paraguay lies on both banks of the Paraguay River, which runs through the middle of the country from north to south. In 2014 Paraguay was named the happiest country in the world according to the Gallup poll called the “Positive Experience Index”.

If you are moving to Paraguay from the UK the population has an estimated 6,954,282 people, which has a very low population density, with 15 people per square kilometre. The official languages of Paraguay are Guarani and Spanish which are the most widely spoken. Guarani is the indigenous language of South America and is spoken in many neighbouring countries like Argentina and southwest Brazil. English, Japanese, German, Korean and Ukrainian are also spoken by many immigrants in the country. The most popular destinations for expats to move to Paraguay tend to be in the larger cities such as the capital of Asuncion, San Lorenzo and Capiata.

Agriculture is a very important sector in the country’s economy, as it contributes 16% to the GDP. For those looking to work in Paraguay the major industries are sugar, cement, textiles, beverages, wood products, steel, metallurgic, electric power. Many expats also make a living by teaching English to those living in the country.