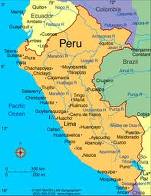 Do you need removals to Peru? If you are thinking of moving to Peru from the UK you will be joining a country famous for its ancient culture and a nation of over 30 million people. Officially the Republic of Peru, it is a county in western South America. It is bordered in the north by Ecuador and Colombia, in the east by Brazil, in the southeast by Bolivia, in the south by Chile, and in the west by the Pacific Ocean. Peru is an extremely bio-diverse country with habitats ranging from the arid plains of the Pacific coastal region in the west to the peaks of the Andes mountains vertically extending from the north to the southeast of the country to the tropical Amazon Basin rainforest in the east with the Amazon river.

The official languages spoken in Peru are Spanish, Quechua and Aymara. The population is a mixture of ethnicities and heritages, which makes for a diverse and colourful melting pot of different languages, cuisines and cultures including Chinese, Spanish, Amerindian and other influences. The currency used in Peru is the Nuevo Sol. There are many global organizations in Peru trading in chemicals, transport, services, technology, natural resources, food and telecommunications.

Many of those moving to Peru will be looking to move the larger cities, including the popular Capital of Lima, rather than the more rural areas as there is less work opportunities there, as Peru is still a developing country there is still some poverty in areas. But contrary to some negative stereotypes all of the major cities have the same amenities you would expect to find including internet, plumbing, electricity and heating available virtually everywhere. Peru has gone through periods of political unrest, but is now in a period of stability as well as on an economic upswing. Its natural resources are plentiful and the main industries include mining, manufacturing, agriculture and fishing.