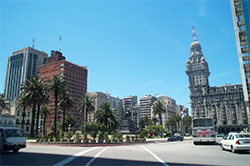 Do you need removals to Uruguay? Uruguay is a country in the south eastern region of South America and is home to an estimated 3.3 million people. It is bordered by Argentina to its west and Brazil to its north and east and the Atlantic Ocean to the south. The terrain has rolling plains, low hills and fertile coastal land and climate is mainly warm and temperate.

Uruguay was founded in 1726 by the Spanish as a military stronghold, taking advantage of its natural harbour which has become an important commercial centre today. Although it is the second smallest country in South America, Uruguay’s natural resources are plentiful and include hydro-power, minerals, arable land and fisheries. 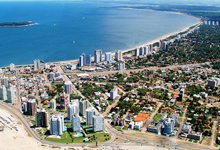 Many of the people moving to Uruguay settle in the largest city and capital Montevideo where 1.8 million people reside in its metropolitan area. The Government is a Constitutional Republic that got its independence from Brazil in 1825. The currency is the Uruguayan Peso and the official language is Spanish. The main industries of the country are food processing, electrical machinery, transportation equipment, petroleum products, textiles, beverages and chemicals.

Get Removal Quote from UK to Uruguay