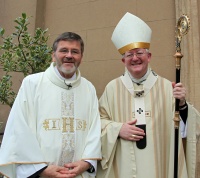 Burke Bros Moving Group are pleased to announce that we have been chosen to organise the move for Father Patrick Daly to Brussels. Arch Bishop Rev Longley paid tribute to Father Daly during his farewell mass as past priest of St Peters & St Pauls.

Moving to Brussels taking up his new appointment as General Secretary of COMECE- commission of the Bishops conference of the European Community. Father Daly said he was sad to leave after 14 years but a great honour to be appointed in his new role.

The move is being carried out in the next few days and Ben Hingley our sales Manager was pleased to secure the move also looking forward to be of service to Father Daly. We wish Father Daly all the best in his exciting new role in Belgium.