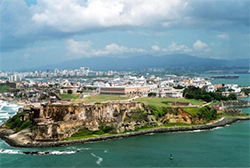 Do you need removals to Puerto Rico? Puerto Rico is officially the Commonwealth of Puerto Rico and is a United States territory located in the north-eastern Caribbean and is situated on the east coast of Central America. The country is east of the Dominican Republic and west of both the United States Virgin Islands and the British Virgin Islands. Those moving to Puerto Rico may not be aware it is actually an archipelago that includes the main island of Puerto Rico and a number of smaller islands, the largest of which are Vieques, Culebra and Mona. Due to its location, Puerto Rico has a tropical climate and the weather is warm all year round with an average temperature of 28°C, although the hurricane season lasts from June to September. Please be aware that moving to Puerto Rico means moving to a geological hazard zone where earthquakes, tsunamis and landslides may occur.

For those of you moving to Puerto Rico from the UK you will joining a population of over 3.5 million people. The official languages are Spanish, which is the most commonly spoken, and English. Most international expats moving abroad tend to opt for living in the larger cities, such as the Capital San Juan which is a very popular destination. As Puerto Rico is a United States territory the currency used is the US Dollar and the educational system follows the same standards and teaching curriculum as the one in the USA. 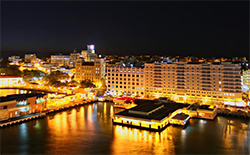 If you are thinking of working in Puerto Rico manufacturing is its main industry which attributed for over 46% of the country’s GDP in 2013. Therefore, around 10% of people work in manufacturing industries such as the production of electronics, machinery, chemicals and pharmaceuticals. Agriculture is less important accounting for less than 1% of the GDP, but some crops are still an important form of income for workers such as coffee, fruits and vegetables and livestock. With most of the farmers in Puerto Rico producing for the US they have a very large market.